日本人の美意識 ～The Japanese Idea of Beauty

＜２．人生とは「無常」(Impermanence as a way of life.)＞
・日本人の人生観と美意識に影響を与えた2つの考え方
（Two Major ideas in Japanese philosophy and aesthetics:）

①無常（Impermanance）
Mujo is a central idea.
Not always as regret but as something to be celebrated.
The wave idea: In the Buddhist tradition, all things are considered as either evolving from or dissolving into nothingness. This 'nothingness' is not empty space.
It is, rather, a space of potentiality.
If we take the seas as representing potential zen each thing is like a wave arising from it and returning to it.
There are no permanent waves. There are no perfect waves.
At no point is a wave complete, even at its peak. 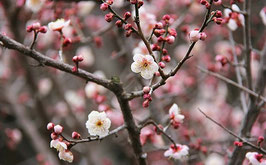